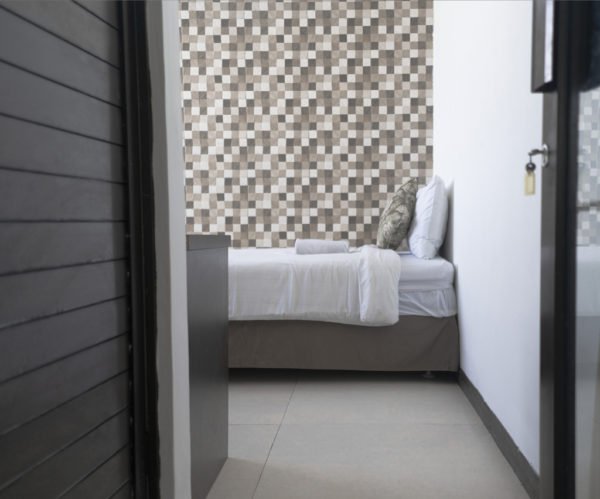 Traveling Bali by yourself? Our single room is perfect for all of you solo travelers! Relax in our comfy double bed with white linens, custom wood furnishings, and beautiful Bali views! This room comes included with a private bathroom with a walk-in shower. Our signature amenities come included in all of The Paica rooms. 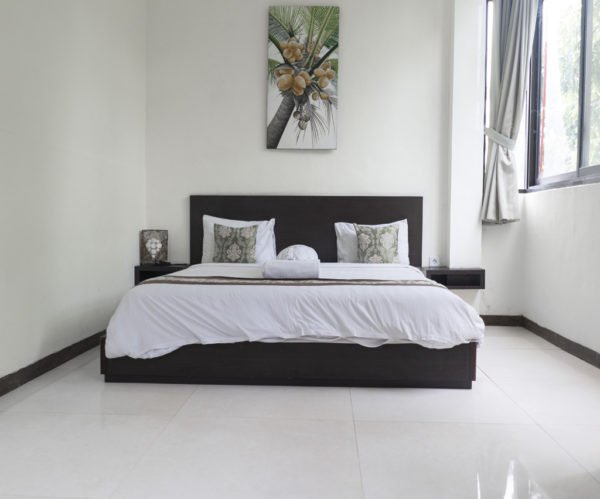 Traveling with your significant other or traveling alone but want a nice, big, comfy bed?  Our suite rooms come equipped with a deluxe king-sized bed covered in white linens. Guests can take in beautiful Bali jungle views, catch up on some social media with our complimentary wifi and hook their computers up via HDMI to our flat screen TVs. These rooms come included with a private bathroom with a walk-in shower. Our signature amenities come included in all of The Paica rooms. 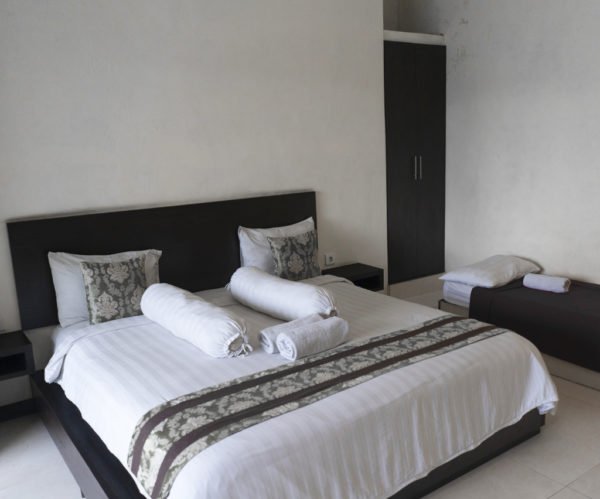 This room is ideal for 3 fellow Bali travelers. Our three person room at The Paica offers two beds and can accommodate up to 3 guests. From our plush beds covered in white linens, guests can take in beautiful Bali jungle views, catch up on some social media with our complimentary wifi and hook their computers up via HDMI to our flat screen TVs. This room comes included with a private bathroom with a walk-in shower. Our signature amenities come included in all of The Paica rooms. 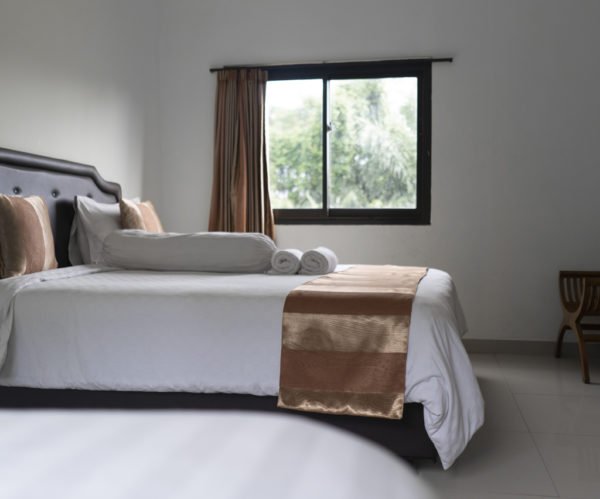 Coming to Bali together with the squad is a dream come true! Our 4 person room at The Paica offers three beds and can accommodate up to 4 guests. From our plush beds covered in white linens, guests can take in beautiful Bali jungle views, catch up on some social media with our complimentary wifi and hook their computers up via HDMI to our flat screen TVs. This room comes included with a private bathroom with a walk-in shower. Our signature amenities come included in all of The Paica rooms.

We call this room “The Jungle Suite”. The pictures explain why. This suite is the biggest room at The Paica. With its glass windows that reach the ceilings, you get panoramic views of the Bali jungle. With rustic wood floors to the custom made furniture from Ubud. Take a moment and sit outside your private terrace overlooking a secluded river. Sit down in the walk-in shower and let the running water cool you off after a long day exploring Bali. This room comes included with an HDMI cable so you can connect to the flat screen TV. Our signature amenities come included in all of The Paica rooms.

A type of intentional community providing housing within which multiple people share a single home having shared areas such as kitchens and other living spaces. The purpose of coliving is to create an environment that inspires and empowers its residents to be active creators and participants in the world around them. These environments cultivate collaboration and cohesiveness amongst residents and the extended community. Coliving spaces enable sustainable lifestyles through sharing and efficient use of its resources. Here is what one of our members said... Compared to The Paica, my experience in hotels was always flat and boring. I would never choose those options again when places like The Paica are available.

Living in Bali, for most, is a dream come true. Beautiful scenery, great local people and vibes that get the creative brain flowing! If you consider yourself a digital nomad, entrepreneur or someone who is a creative and highly ambitious, Bali is the place to be! Some have called this island the ``Silicone Valley`` of Indonesia!

do you offer short term?

Absolutely. It doesn't matter if you stay at The Paica for one night or one year, you will feel part of our community. That is the special thing about our space!

How is the wifi?

We have very reliable internet so that way you can stay connected to the world. Currently we have 60mbs speeds and we are currently looking into expanding our Co-Working Space to add up to 120mbs speeds.

How do i get a visa in Bali?

At The Paica we can't supply you with any sponsor letters but we can give you our recommended Visa Agents to better help you when you arrive! Shoot us a message if you would like more info.

How does the shared kitchen work?

They say people who love to eat are always the best people! Our kitchen gathers the community together and has been an important part of the experience here at The Paica. You will have full access to dual burners, refrigerator/freezer, microwave, pots & pans and lots of other kitchen necessities.

Is Bali a safe place?

As with anywhere it pays to be vigilant about your safety. Walking around late at night anywhere by yourself is rarely a great idea anywhere in the world. The same goes when you are in Bali. Generally, we recommend exercising the usual caution when you travel. Try and resist the urge to flash expensive electrical goods around. Keep money in small denominations in different places, rather than carrying around wads of cash in one easy to steal wallet. Bag snatching is an occasional problem at night, so keep your bag out of sight or wear a money belt or a rucksack as opposed to a handbag with a single strap. Overall though, Bali is a very safe place with great local people!

Can i rent a motorbike?

Yes you can. We have different styles of motorbikes you can rent at The Paica. Daily and monthly rates are available.

Do you offer luggage storage?

Yes we do. We have daily, weekly and monthly rates available.

Do you have a cafe?

We just opened a brand new breakfast cafe located inside The Paica! It's called EGGBABY. A twist on the NYC classic breakfast sandwich. We took the culinary approach to perfecting our egg dishes.

How many rooms do you have?

How is the hospitality?

If there is one thing we focus on it would be hospitality. Making you feel cozy at your new home in Bali! We have weekly room cleaning. 24/7 maintenance on call. Laundry services available onsite. Daily towel cleaning. Anything you need, just ask!

How is the weather in bali?

There are essentially two seasons in Bali, wet and dry. The seasons vary but generally, the wet season runs from around November to April before things start to dry out again. The driest time of the year is probably June to September, it is also cooler at this time of the year and it’s the peak time for tourist visits. During the wet season expect brief but torrential downpours. Bring your favorite waterproofs from home or buy a trademark wet season poncho while you’re here. But it’s not all raining cats and dogs, even during the rainy season you’re likely to catch some rays!

Is there an atm close by?

There are a few ATMs close to The Paica and many all over Bali, including at the airport. Cards are accepted at many hotels and restaurants but cash is by far the easiest way to pay. While Bali is generally pretty safe there are scams that happen so we suggest you go to ATMs that are attached to banks and located inside the banks or in stores which are staffed. There have been times where scam artists play around with the machines. So always give a visual check in an ATM and make sure there aren’t any loose parts on the machine. The currency in Indonesia is the Indonesian Rupiah. When you get to Indonesia you will soon become accustomed to carrying around large denominations of Rupiah. This is because 1 million Rupiah equates to about US$72 at today’s prices. So don’t be alarmed when the ATM asks if you want to withdraw 1,000,000 Rupiah. It is unlikely to bankrupt you!

Is the drive easy from the airport?

The international airport in Bali is Ngurah Rai International Airport, also known as Denpasar International Airport, which is located in southern Bali, 13 km south of Denpasar. Denpasar is the capital and the most populous city in Bali and Ngurah Rai is Indonesia’s third-busiest international airport. You can get to The Paica from the airport by taking Uber Taxi and Grab Taxi. They are fast, convenient, and cheaper than the local taxi. However, this has created some animosity with other local, non-app taxi drivers, which resulted in Uber and Grab being banned from entering certain areas in Bali. Consult with your driver first when deciding to book with these two apps. Shoot us a message if you would like our private driver to pick you up from the airport!

I opened The Paica with specific values. I wanted our guests to feel like they are part of our family. The word ``Paica`` is a Balinese word pronounced in the English language like (PIE-CHA). The word Paica means ``Gift From God``. I started out as a hotel in March 2015 with my first guest with only 8 rooms. Today we have an entire complex with over 16 rooms. As time goes by, I transform my establishment to something for the future, a sustainable living environment that is comfortable, unique and friendly. Travelling is a lifestyle and Coliving is the future. Safe travels and I hope to meet you soon!

"When looking at all the stresses involved in uprooting your life and moving to Bali, moving into The Paica was completely stress-free. Not only that, the chance to meet new, friendly, like-minded people that make you feel part of a family, made a big difference."

"When living at The Paica, I, along with others, have thought more about how physical space affects the ways we interact with one another. In a community like theirs, it creates interaction. The staff and the ability to move in with only 2-3 bags and have everything else provided is why I lived there for one year."

Have a question before you book? Let us know. We are available around the clock. We hope you stay with us. Safe travels to Bali!

You don't have permission to register